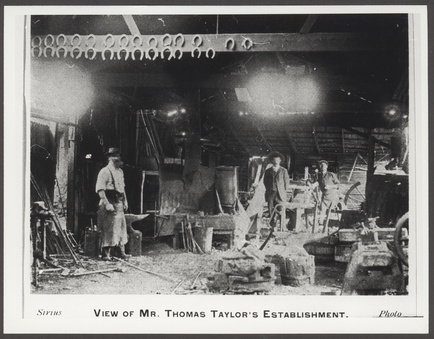 In recent days I have been posting photos of some of the old buildings in the historic town of Terowie. Terowie is in the mid-north of South Australia between Peterborough and Burra and north-east of the Clare Valley. In its heyday it was a bustling railway town and an important service centre for the surrounding rural properties. These days it is a sleepy residential backwater with only a handful of the former businesses still operating.

On our recent drive through the town – one needs to take a detour off the main highway – I took the photo above of the Hidden Waters Emporium. I always smile when I see such a modest building have the title of “emporium”. The word for me conjures up images of very large stores selling a large variety of items, a bit like our department stores of today. It speaks to me of grandiose structures, not tiny buildings like the one shown in the photo above.

The definition of the word can vary depending on which dictionary you consult. Some define it along the lines I have described, while others are content to leave it at describing any store which sells a variety of items. I know nothing of the history of this particular “emporium” except that there are several references online to it being a second-hand shop in the past. One of those references is here in the National Library of Australia. The entry there shows a photo of the shop in operation as a second-hand outlet.

Sadly, this fascinating building seems to be well past its prime and is only used as a storage place for some junk.

Update: Since writing this article I have discovered where the “Hidden Waters” name is derived.

Terowie, whose name is derived from a local Aboriginal word meaning ‘hidden water’ was originally a watering pause on a stock route from the north-east of South Australia. Terowie is an historic town in the mid-north of South Australia, between Burra and Peterborough. We paid a short visit to the town recently after visiting family in Peterborough. One of the old buildings which caught my attention is shown in the photo above.

I can’t find any reference to who C.B. Nourse was, but in the heyday of the town when it was a thriving service centre for the surrounding rural district, this business must have also done very well.

Times change and the town is now a quiet backwater, with very few businesses still open. Many old buildings have been abandoned and are deteriorating and the population has dwindled.

The wording on the fascia board is of interest to me. A “lubritorium” is obviously an establishment where motor vehicles are lubricated, maintained and repaired. While the term is in common use in the United States it is less so these days in Australia, though I seem to remember when growing up in the 1950s that it was far more widespread in usage here in Australia too. These days we tend to use “service centre” or even “garage” instead.